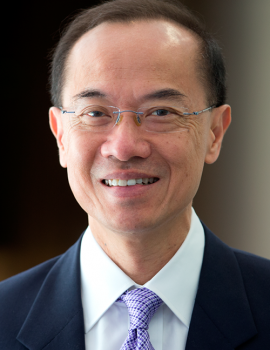 Mr George Yeo is currently a Visiting Scholar at the Lee Kuan Yew School of Public Policy of the National University of Singapore, and the Founding Patron of its Asia Competitiveness Institute.

Mr Yeo has a BA in Engineering (Double First) from Cambridge University and an MBA (Baker Scholar) from Harvard University.

He began his military career as a Signals Officer in the Singapore Army, crossed over to the Air Force, became Chief-of-Staff of the Air Staff, and Director of Joint Operations and Planning in the Defence Ministry attaining the rank of Brigadier-General.

Mr Yeo was a Member of the Pontifical Commission for Reference on the Economic-Administrative Structure of the Holy See in 2013-2014 and the Vatican Council for the Economy from February 2014 to July 2020.

Mr Yeo was the Conference Chairman of the Singapore Summit from 2012 to 2016.