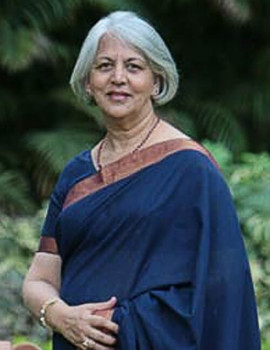 Chairperson, Board of Governors, Indian Council for Research on International Economic Relations

Isher Judge Ahluwalia is the Chairperson of the Board of Governors for the Indian Council for Research on International Economic Relations (ICRIER). Prior to this, she served as ICRIER’s Director and Chief Executive.

She is the appointed chair of the High Powered Expert Committee on Urban Infrastructure of the Ministry of Urban Development. Dr Ahluwalia is also a member of the Government of India’s National Manufacturing Competitiveness Council; is on the boards of a number of premier research institutes in India, and was Vice-Chairperson of the Punjab State Planning Board from 2005 to 2007.