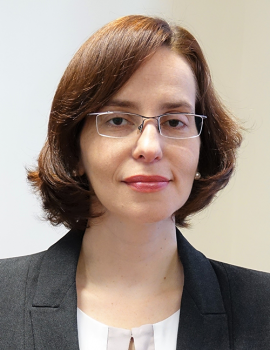 Bruna Mara Liso Gagliardi is a career diplomat with Brazil’s Ministry of Foreign Affairs since 2006 and has worked in the field of human rights for the past 5 years.  She has represented the Brazilian government in various multilateral fora, including the United Nations and the Interamerican System of Human Rights. She has previously served at the Brazilian Embassy in Seoul (2008-2010), in Brussels (2011-2013) and in San Jose (2013-2015).

Bruna has lectured on international relations for undergraduates and on international human rights law at Rio Branco Institute, the government’s official Diplomatic Academy. She is currently an Asia Global Fellow at the Asia Global Institute, University of Hong Kong, where she is researching issues related to privacy, online surveillance, data collection and cybersecurity.

Before joining Brazil’s Ministry of Foreign Affairs, Bruna has worked as a press officer for the international NGO Medicins Sans Frontieres and helped setting up the first commercial street paper in Brazil, OCAS.