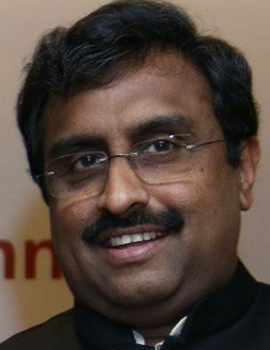 Shri Ram Madhav is an Indian politician, writer and journalist. He serves as the National General Secretary of the Bharatiya Janata Party. He is a former member of the National Executive of the Rashtriya Swayamsevak Sangh.

Shri Ram Madhav was born in Amalapuram in the East Godavari district of Andhra Pradesh on 22 August 1964. Primarily a student of engineering, he earned his Diploma in Electrical Engineering from Andhra Pradesh. He has a post-graduate degree in Political Science from the University of Mysore, Karnataka.

Shri Ram Madhav's association with the Rashtriya Swayamsevak Sangh began as a teenager. He volunteered to be a full-time worker for RSS in 1981. He was assigned to several key positions in the organization and has been the Senior Functionary, Media interface, Interlocutor for the intelligentsia for the RSS.

Shri Ram Madhav was the editor of Bharathiya Pragna, a monthly magazine in English published by Pragna Bharati, and associate editor of Jagriti, a Telugu weekly. He also served as a director in several film censor boards and educational institutes of India. He worked as a journalist for over 20 years with RSS sponsored publications and authored more than twelve books His latest is Uneasy Neighbours: India and China after Fifty Years of the War.

He also serves as the Director of the India Foundation, an independent thinktank focused on the issues, challenges and opportunities of the Indian polity. He has visited more than 32 countries and spoke at various national & international forums.

He served as the national spokesperson of the RSS from 2003-2014. Shri Ram Madhav was deputed to the BJP and appointed as its national general secretary in 2014.