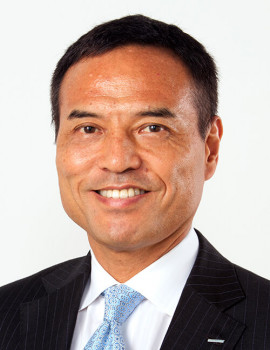 Tak Niinami is the Chief Executive Officer of Suntory Holdings, one of the world's leading consumer products companies with operations throughout the Americas, Europe, Asia and Oceania. Prior to joining Suntory in 2014, Tak served as CEO of Lawson, Inc., which he grew into one of Asia’s major convenience store operators, posting profit growth for 12 consecutive years and quadrupling its market capitalization during his tenure.

Outside of Suntory, Tak is a member of the Council on Social Security Reform for All Generations, and has served on the Council on Economic and Fiscal Policy as senior economic advisor to the Prime Minister since 2014. He is also Vice Chair of the Board of Councillors of Keidanren – Japan Business Foundation, and Vice Chairman of the Japan Association of Corporate Executives. Tak is also a member of the International Chamber of Commerce’s Executive Board, the World Economic Forum’s International Business Council, the Advisory Board of the World Economic Forum Center for the Fourth Industrial Revolution, the Global Board of Advisors of the Council on Foreign Relations, and The Business Council in the US.