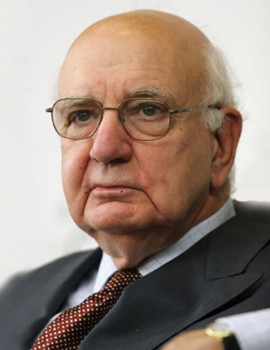 Former Chairman, Board of Governors, US Federal Reserve

Mr Volcker’s career began in 1952, when he joined the Federal Reserve Bank of New York as an economist. After stints both in the public service and the private sector, Mr Volcker returned to public service in 1969 as Under-Secretary of the Treasury for Monetary Affairs until 1974. He played an important role in the decisions leading to the US suspension of gold convertibility in 1971, which ended the Bretton Woods system. After leaving the US Treasury, he became president of the Federal Reserve Bank of New York from 1975 to 1979, and then Federal Reserve Board Chairman in 1979.

As Chairman of the Economic Recovery Advisory Board, he called for a breakup of the nation's largest banks, prohibiting deposit-taking institutions from engaging in riskier activities such as proprietary trading, private equity, and hedge fund investments. The so-called “Volcker Rule” was proposed to prohibit US banks from engaging in risky proprietary trades that do not benefit clients. With a number of exceptions, the rule’s provisions are due to be implemented from July this year.