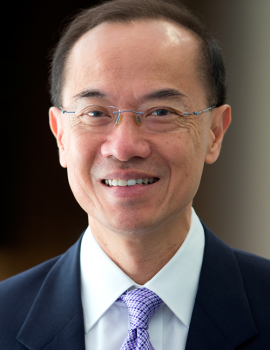 George Yeo joined Kerry Group on January 1, 2012 as Vice Chairman. He assumed the Chairmanship of Kerry Logistics Network on August 1, 2012.

He served 23 years in the Singapore Government (1988-2011) where he was Minister for Information and the Arts, Health, Trade & Industry, and Foreign Affairs until his defeat in the May 2011 General Election.

Mr Yeo studied Engineering at Cambridge University on a President’s Scholarship, graduating with a Double First in 1976, before becoming a Signals Officer in the Singapore Armed Forces. After graduating from the Singapore Command and Staff College in 1979, he was posted to the Republic of Singapore Air Force. He graduated with an MBA (Baker Scholar) from the Harvard Business School in 1985.  He was appointed Chief-of-Staff of the Air Staff (1985-1986) and Director of Joint Operations and Planning in the Defence Ministry (1986-1988), attaining the rank of Brigadier-General.

Mr Yeo served as a Member of the Pontifical Commission for Reference on the Economic-Administrative Structure of the Holy See in 2013-2014.  From February 2014, he became a Member of the Vatican Council for the Economy.

Mr Yeo is Patron of LASALLE College of the Arts and the Eurasian Association, and Advisor to the Sun Yat-Sen Nanyang Memorial Hall. He is a Visiting Scholar at the Lee Kuan Yew School of Public Policy.