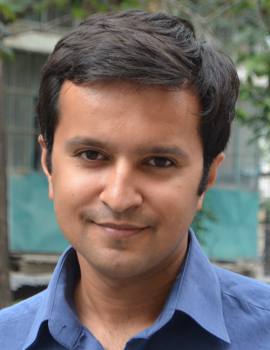 Ananth Krishnan is an Indian journalist and is 2019 AsiaGlobal Fellow at the Asia Global Institute, University of Hong Kong. He was until September a fellow at the Brookings Institution India Center, where he was researching India-China economic relations.  Previously, Krishnan was based in Beijing for nine years, as the China correspondent for The Hindu newspaper and later as the China Bureau Chief for the India Today Group, which is India's biggest media organisation with English television channel India Today Television and Hindi-language channel Aaj Tak reaching more than

50 million people. As an AsiaGlobal Fellow, Krishnan's research is focusing on China's diplomacy and the Belt and Road Initiative, with a focus on South Asia. Krishnan holds a master's degree in history from the University of Chicago, where he studied the relationship between the film industry and politics in southern India. He also holds bachelor's degrees in history and economics from the University of California, Los Angeles (UCLA).