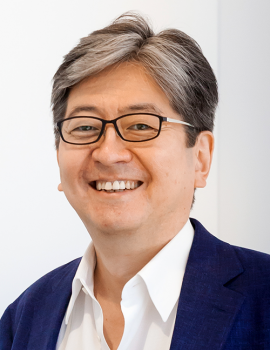 Born in 1963. BA in Law from the University of Tokyo (1987). Began his career at Salomon Brothers and joined Goldman Sachs in 1990. He was the head of their fixed income and currency business in Asia and became General Partner in 1994 at the age of 30, the youngest
ever at that time. In 1999, he founded Monex which was jointly capitalized with Sony. Monex is listed on the 1st section of Tokyo Stock Exchange where he is presently Chairman and CEO.

Monex Group, Inc. is a global online financial institution with operations in three major financial centers. Monex, Inc. in Japan, TradeStation Group, Inc. in the United States , and Monex Boom Securities Limited in Hong Kong. And also in April 2018, Coincheck, Inc., who has been a pioneer among cryptocurrency exchanges, joined the Monex Group. It also has a joint venture in PRC, and Monex Australia at Sydney. The group has about 900 employees worldwide with over half of its staffs located in the United States.

He served as Financial Counsel to the Prime Minister and also as outside directors of several companies including Tokyo Stock Exchange from June 2008 to 2013. He presently is an outside director of MasterCard, Incorporated. and UZABASE Inc. He is also a councilor of International House of Japan and a Vice Chair of Human Rights Watch.