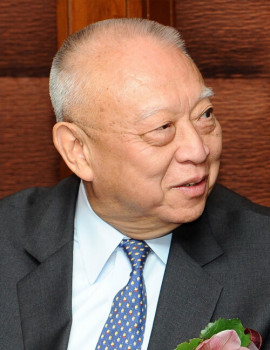 Tung Chee Hwa is the Founding Chairman of the China-United States Exchange Foundation. He previously served as the first Chief Executive of the Hong Kong Special Administrative Region from July 1997 to March 2005 and is currently Vice-Chairman of the National Committee of the Chinese People’s Political Consultative Conference.

Mr Tung has served in a number of public and advisory positions, including as a member of the Executive Council of Hong Kong (1992 to 1996) and the Eighth National Committee of the Chinese People's Political Consultative Conference (1993 to 1996); Chairman of the Hong Kong/US Economic Cooperation Committee (1993-1996), and Chairman of the Council of the City University of Hong Kong (1995 to1996).